Fifteen years after the last devastating Insect attack, the immortal Circle is finally ready to launch an offensive against their implacable enemies. This time they have a new weapon – gunpowder. Hopes are high.

But the Circle’s plans are threatened when the vital barrels of gunpowder go missing. Jant, the Circle’s winged messenger, is tasked to investigate. Soon it becomes clear that the theft is part of a deadly conspiracy … and Jant and his friends are among the targets.

As tensions rise, Jant races to foil the conspirators. Can he expose them in time – or will the crisis blow the Fourlands apart?

Awian exiles are building a stronghold in the Darkling mountains, where the Rhydanne hunt. Their clash of interests soon leads to bloodshed and Shira Dellin, a Rhydanne huntress, appeals to the immortal Circle for justice. The Emperor sends Jant, half-Rhydanne, half-Awian, and all-confidence, to mediate.

As Jant is drawn into the spiralling violence he is shaken into coming to terms with his own heritage and his feelings for the alien, intoxicating Dellin.

Above the Snowline tells the story of Jant’s early years in the Circle – before the drugs took over – and shows the Fourlands as you’ve never seen them before. 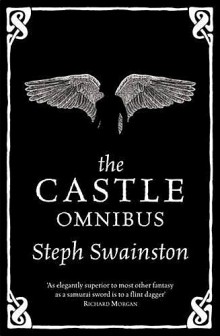 The first three books: The Year of Our War, No Present Like Time, and The Modern World, brought together into an omnibus edition, are available in print and as an e-book.

Embossed with flawless, deep characterisation… There’s joy to discover on every page.
SFX

A powerful sense of the surreal.
Publishers Weekly

Five years after the Island of Tris joined the Empire there are new developments in the Insect war. The sounds of monumental building clank and resound from the Front. Frost, the Architect, is certain she knows what she’s doing and Jant believes her but the immortals are about to bring down on their own heads a bigger disaster than ever before.

Though maybe not quite as disastrous as the sheer confusion wreaked by Lightning’s teenage daughter. The immortals think they are shaping the modern world but it’s fast slipping out of their hands. Even the Emperor can’t predict what will happen but he seems to know more than he reveals.

Swainston’s third novel is an impressive illustration of how fantasy does not have to be imitation Tolkien.
The Guardian

Swainston writes with dash and elegance.
The Times

Swainston writes beautiful prose, flowing and elegant, with clever description and mastery of all technical aspects; she is clearly the kind of talent who could waltz into pretty much any genre she set her mind to.
The Sydney Morning Herald

The Modern World is another welcome glimpse into a fantasy world so aggressive it could knock seven shades of Hell out of most entries in the genre. We can’t recommend it highly enough.
SFX

Serein, the Swordsman, is unexpectedly defeated in ritual combat by a young upstart, who is then sent – along with Jant and other immortals – on a mission to Tris, a recently discovered Utopian island. Unfortunately the immortals make a mess of things.

A second novel that makes one impatient for the third. An uncompromisingly classy act.
Jon Courtenay Grimwood, The Guardian

Swainston is one of the best British authors writing in any genre. She has a facility with language and a genius for plot and character which Booker prize winners could, and should, be envious of… The outstanding fantasy book of the year by a country mile.
Publishing News

Swainston’s scintillating prose, well-developed characters and talent for brilliant absurdities mark this as one of the more innovative fantasies of recent years.
Publisher’s Weekly

The Year Of Our War 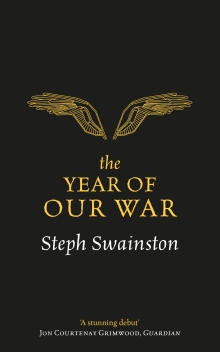 Jant is the Messenger, one of the Circle, a cadre of fifty immortals who serve the Emperor. He is the only immortal, indeed the only man alive, who can fly. The Emperor must protect mankind from the hordes of giant insects who have plagued the Fourlands for centuries, eating everything and everyone in their path. But he must also contend with the rivalries and petty squabblings of his chosen immortals. These will soon spill over into open civil war.

The Year of Our War won the IAFA William L. Crawford Fantasy Award in 2005.

It has been translated into nine languages and published in twelve countries.

A study of guilt and addiction inside a novel about sexual politics, and wrapped in some of the weirdest and best fantasy written in recent years. A stunning debut.
The Guardian

An eye for details of lives that is reminiscent of Mervyn Peake. In fifty years’ time, people will be reading this book and talking about it the way we talk about Gormenghast.
George Walkley, Ink Magazine

Jant really keeps our interest with his destructive lusts. Swainston – and her lyrical debut – got terrific press. Deservedly so.
Kirkus Reviews